Supporting our network of artists

We'd love to ask how we can support our network of artists in these strange times.

Independent artists are used to uncertainty, it goes with the territory, but at the moment it feels like the ground is shifting underneath us all. Isolation is something that all artists feel at times, but right now it feels more important than ever to consider what we can do to help each other. With this in mind, do you have any thoughts about how we might usefully facilitate connections over the next few weeks? There seem to be plenty of Facebook groups springing up, so it doesn’t seem worth adding to this burgeoning field but we could perhaps run regular group video chats, or have an ‘art-buddy’ scheme. You will certainly have better ideas, so please let us know what you want from us.

Email us at This email address is being protected from spambots. You need JavaScript enabled to view it. to let us have your thoughts. In the meantime, you might be interested in this link to freelancer-specific guidance from the Association of Independent Professionals and the Self-Employed (IPSE).

With best wishes from all of us at Magnetic North,

I’m on the other side of the world, at the almost northernmost point of the north island. This is Cape Reinga, where the Tasman Sea meets the Pacific Ocean in a spectacular swirl of currents. It is a sacred site, steeped in spirituality; for Māori, this is the place where the wairua (spirit) of their recently passed loved ones depart to the afterlife, their homeland Hawaiki. If you travel over the river Forth on either the road or rail bridge at the moment, you see an extraordinary sight: the almost complete new Forth road bridge. Watching a bridge being built is an amazing sight, it always makes me appreciate the astonishing feat of engineering that a bridge is. Too often, we travel over them, taking them for granted because they’re just there. But can you imagine the leap of faith that was necessary to build the first bridge? Maybe someone found a fallen tree over a stream and used it to get over. Maybe then, someone thought that they could move that fallen tree to a better place? But how do you get from that, to building stone bridges? And from there to building huge suspension bridges?

The development of bridges from fallen trees across streams to structures two miles long connecting islands is a beautiful example of a long term collaboration.  Over thousands of years, the gradual refinement of the idea continued, sometimes led by improvements in technology: the development of steel wire in the 19th century enabled spans and loads to increase hugely. Sometimes by vision: maybe someone asking the question ‘why shouldn’t we bridge that gap?’  Sometimes by necessity: ‘how much time could we save if we could go straight over there, rather than going round?’  This strikes me as a metaphor for artistry. Some leaps have arisen from technological developments – steel strings rather than gut, for example – others from a creative leap – someone deciding that rather than a narrator and chorus, a character could step forward and speak for his or herself;  or both - perspective required both the imagination to understand it was needed, and the technical understanding to codify it.

I remember being shown a slide of the painting "Christo Morto" by Mantegna at school and being startled by how daring the foreshortening was and how modern it seemed, even though it was 500 years old.  But whatever the root of a development, and no matter how sudden or gradual a development is, it is always a collaboration between the past and the present. So just as we couldn’t have the new Forth bridge without someone putting a felled tree over a stream thousands of years, so we act as creative bridges between what has happened before and the potential for something else to happen in the future. How we interpret that is a matter of choice. Do we want to acknowledge what has gone before us? Or do we want to ignore it? Either is a choice, but we have to be aware of the choice. The worst thing is either to ignore the past without knowing it, or to assume that received assumptions are correct. When Marcel Duchamp did this:

It was an apparently simple act of defacement, but there are several layers of meaning within the act – by defacing this particular image, he not only changes perceptions of what constitutes a work of art (Duchamp’s contention being that anything can be a work of art if an artist decrees it one), he defaces an iconic ideal of beauty.  But by using a cheap, poor quality postcard reproduction, he also draws attention to the degradation of the image that has already taken place, he questions whether we have unthinkingly accepted it as a great work of art without ever really looking at it.  He looks back into the past and forward into the future at the same time and knows he is doing it.

But are we just our own bridges, connecting past and future, or are we part of a whole system of bridges, rivers and streams?  Should we see ourselves as part of a network of connections and links – linking audiences to our work, to other people’s work, linking us to other artists and other artforms.  Are we part of a great tradition that progresses inexorably from one thing to another, or are we part of a net that stretches all around us? Is our job as artists to look for the tiny capillaries of connection as well as the thundering road bridges we can see from miles away?

Pointing and thinking - what I learnt from Giacometti 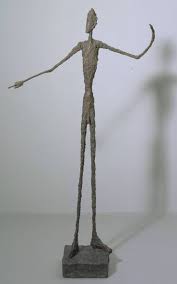 A few weeks ago, Swiss artist Alberto Giacometti's sculpture Pointing Man was sold for a world record $141 million [Guardian story]. I first saw this sculpture in real life, rather than in reproduction, at the Scottish Gallery of Modern Art about 15 years ago as part of a Giacometti retrospective.

I thought I knew his work quite well from work I'd seen in other galleries and from reproductions, but being confronted by a collection of the work in one place was quite a different experience. I was very moved by what I saw, by the cumulative effect of seeing so much of his work together, and the sense it gave of what he was trying to do. I had probably thought till then that he made a lot of work that was quite similar, but I was missing the point. He was working to refine an idea, not to repeat himself. Particularly striking was the variation in scale. This piece is large - life size, you might say - but other sculptures were tiny, just a few centimetres high. Giacometti said that he didn't set out to make them so small, but that was how they kept ending up.

So, there are two things that fascinate me in particular about this work: first is the removal of all unnecessary flourish. this is about as far as you could get from baroque style. I remember staring at this sculpture in the gallery and thinking it looked like a figure seen from a distance in a heat haze: the form told you it was human because it contained the essence of the human form, even though there appeared to be no detail. What is interesting about this is that in the mid-1920s – about 20 years before this particular work – Giacometti made a conscious decision to change the way he worked. He had become frustrated by his approach, which was based on the traditional method of working from a model. So in late 1925, at the age of 24, he decided he would work only from memory – he separated out the task of observation from the task of interpretation and his work was transformed.  If you look at his work from before this time, it’s good, but lacking in the  character that makes his later work so distinctly his.

The second thing was about the humanity of the act of pointing. It was only later that I began to see this. Pointing is a human act: no other species understands it as we do. If you try to direct an animal by pointing, the animal will look at the end of your finger, not to where you are pointing. Humans have developed an ability to abstract a pointing finger: we understand that it refers us to something we aren't looking at, or maybe even something we can't see because it's over the next hill. It's such a simple act, but it summarises the sophistication of the human brain. If I point to my cat's bowl, she stares at my finger; if I point to my son's bowl, he looks at the bowl. So here is this beautifully refined - in the sense of anything extraneous being removed - sculpture that perfectly captures what it is to be human, and perhaps what it is to be an artist. The act of pointing is a wonderful thing in itself, but think of how we have refined that act still further. When I went to vote in the Scottish referendum last year, I saw this sign. 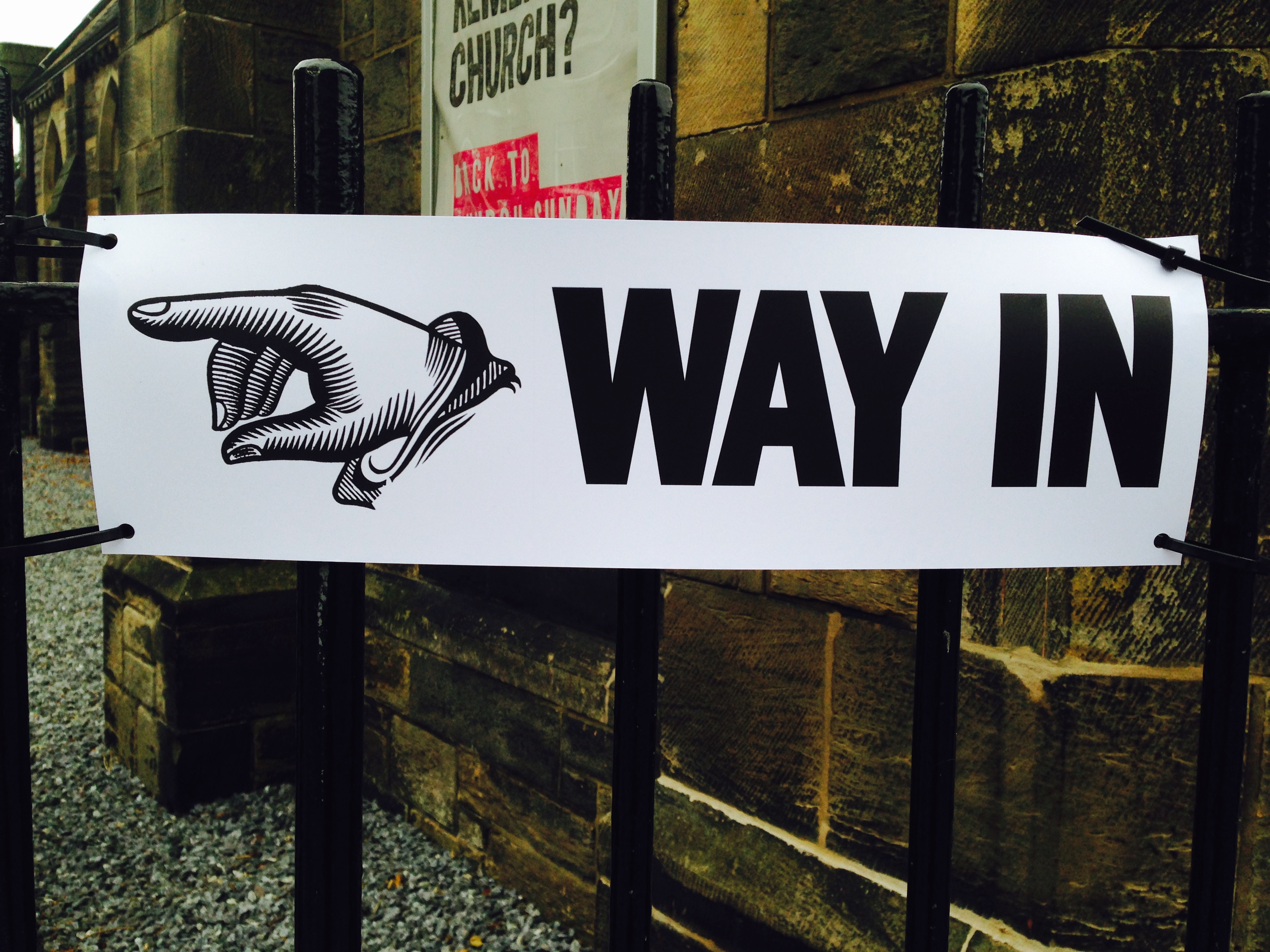 It's nicely old fashioned in style - the finger is still there, recognisable, though someone has interpreted it.  We see this on signposts sometimes: 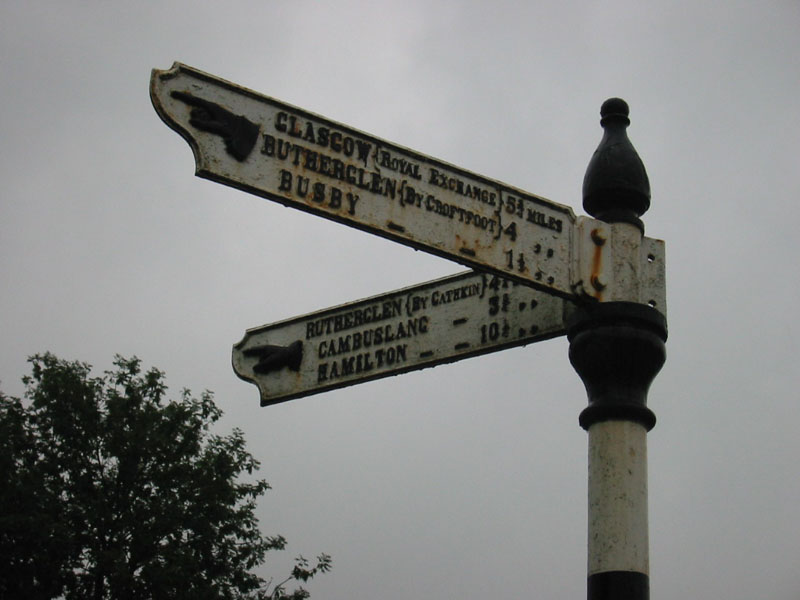 but even then it can be abstracted further to an absolute minimum of form that tells us exactly what we need to know. 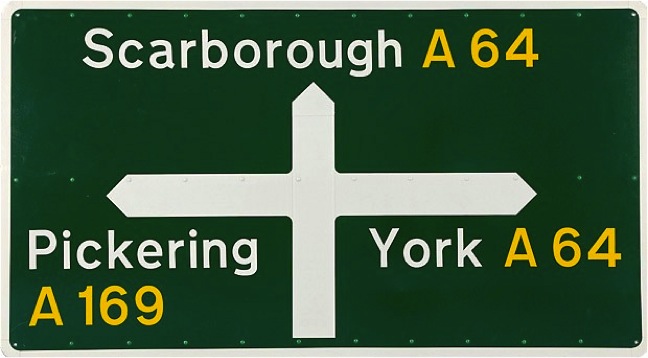 So is that the job of an artist? To tell people exactly what they need to know? But then how do you know what it is they need to know? Or is it more complex than that? Are artists there to point to the right question? Or to point to a number of possibilities? To leave space for the listener or observer to fill in the gaps?

What would happen if you thought you had found the answer?  Could you carry on?  What’s interesting about the answer Giacometti found when he changed his method of working was that, although it answered one question, it enabled him to ask many more.

This blog is based on part of a talk I gave at the Royal Conservatoire of Scotland in October 2014.

Guest - J. Sharp Taking A Walk
07 September 2014
Very much enjoyed your show at the Brunton Theatre last night and the silent walk to start was an excellent addition, creating the perfect atmosphere....